Hugh Laurie and Omar Epps played it diplomatically (don’t really have one), Robert Sean Leonard’s is the pilot episode, Odette Annable’s favorite is Nobody’s Fault (the one where Chase was stabbed), Peter Jacobson’s is the episode where Kutner killed himself. Wait, Charlyne Yi is sitting right there, and she didn’t get to give an answer?? What the heck? And where is Jesse Spencer?

Let’s start with the big shocker first – Wilson has cancer. No really, he does. Judging from the preview for the next episode (The C-Word), this is not a prank, or joke, or trick. I’m not sure how I feel about this, on the one hand, the House-Wilson relationship is the most important one on the show, so it’s entirely appropriate that the last few episodes of the show should focus on the two of them. On the other hand, really, show?? You’re going the “my best (and only!) friend has cancer” storyline now? Feels very exploitative.

I don’t really buy that House would be willing to leave the boy un-cured just because he doesn’t want religion to get the credit. Like Adams said, since when does House care about getting credit? Interesting though that the episode left the levitating incident unexplained. House must have been so distracted with Dominika; usually I would have expected him to try and figure out how the patient managed to levitate. Serves him right that Dominika left, what he did was abominable, like Wilson said, basically keeping her a prisoner.

Taub: So, you’re worried about what it means?
Park: I’m not worried, it means nothing. It means something, doesn’t it? I work with him, I can’t want to sleep with him.
Taub: Maybe Chase just represents work, and you’re in love with your job.
Park: It … has been very satisfying lately. 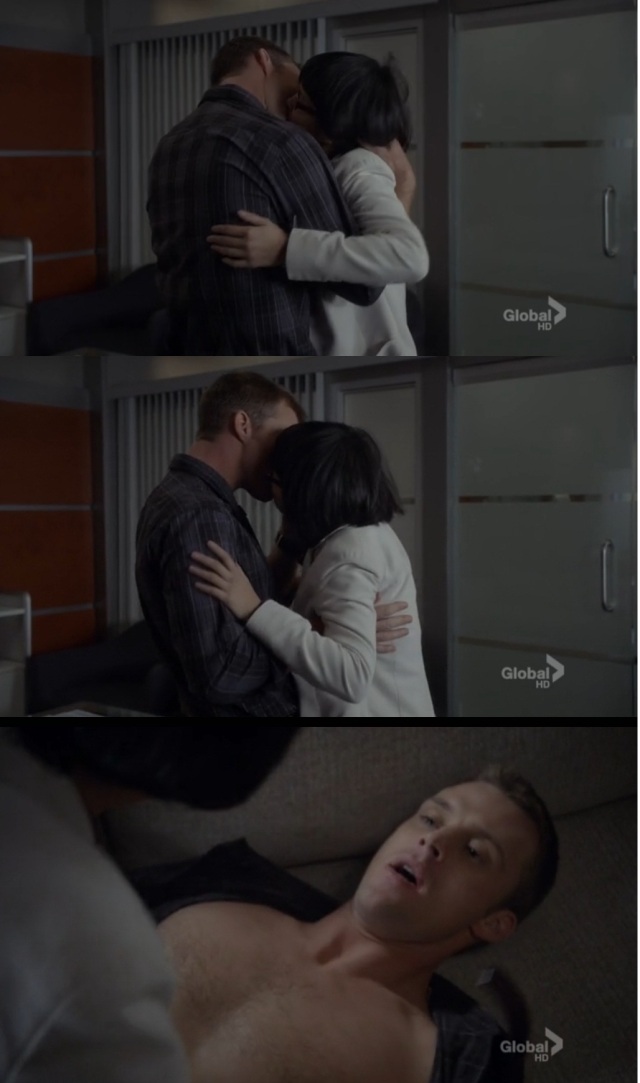 I knew it was a dream even before they satrted kissing, the minute they said “bitch” and “dick”. Come on, that’s not something these two would really say to each other!

Park: Was I good?
Chase: It doesn’t mean anything. The idea got planted, it was probably inevitable.
Park: It means something.
Chase: What?
Park: Well, it could mean the obvious, that you want some of this. When will you learn that that look is insulting? Or … it could just mean that we like each other. I’m weird, and you’re pretty, but we connect. We feel safe, we trust each other.
Chase: Maybe.
Park: Just testing my theory. 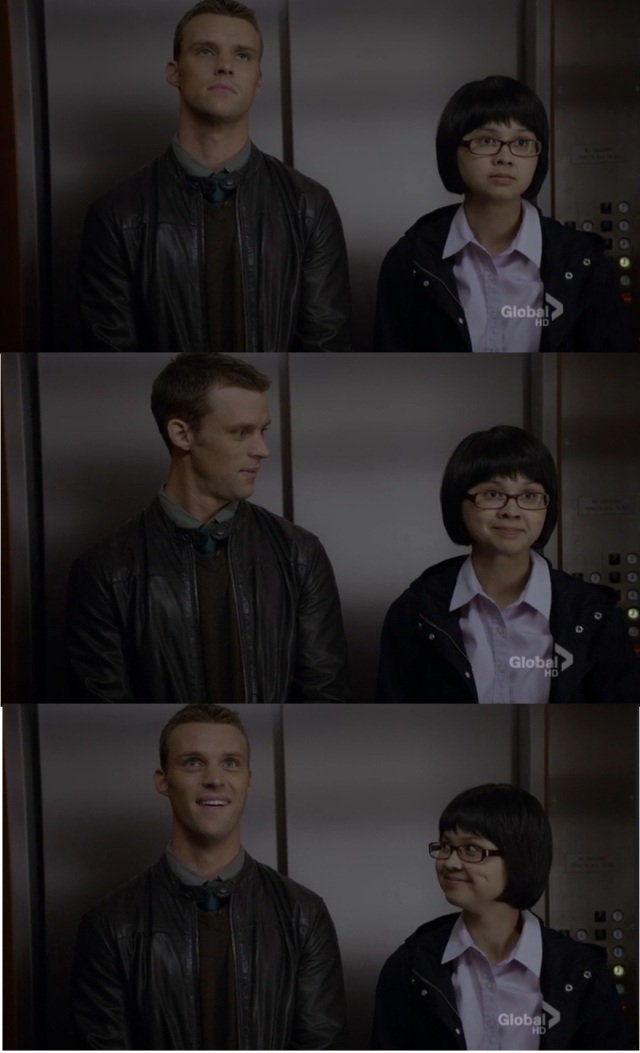 Wow, I hadn’t thought of that C-word (commitment). But seriously, if the show ends with House committing to Dominika, I’m going to throw stuff. Good for Michael Ausiello for recognizing how pissed off a lot of fans will be if the finale is made to be about Thirteen. Love Hugh Laurie’s British accent.

Oh come on! According to David Shore, Thirteen comes back “to give House a little advice”. Sure, of all the people on the show, she’s the only one who really understands House, not Wilson the best friend, not Chase or Foreman who’s been around him for 8 years, but Thirteen the magical lovable doctor. Sighh, I’m hating this more and more. And I really, really wanted to be positive about the finale. I bet the one-hour retrospective special will also be full of Thirteen! Yay!! 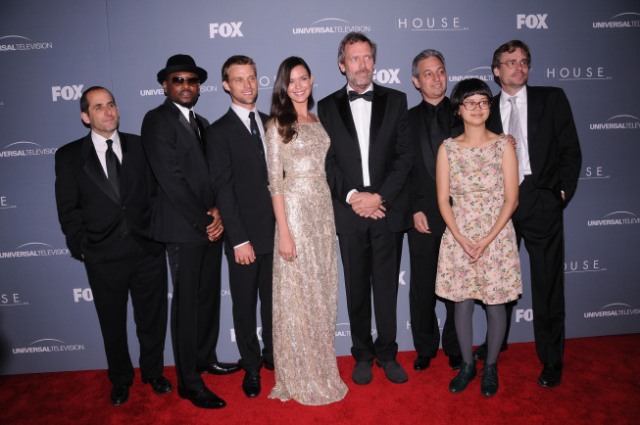 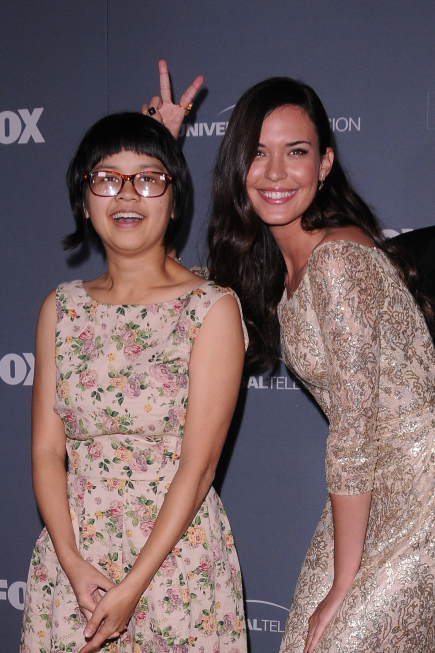 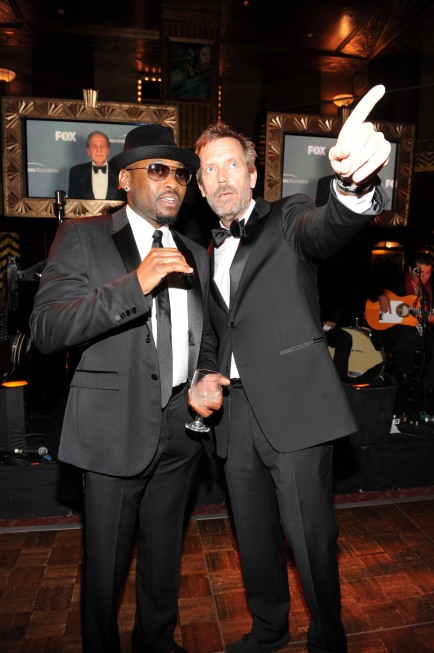 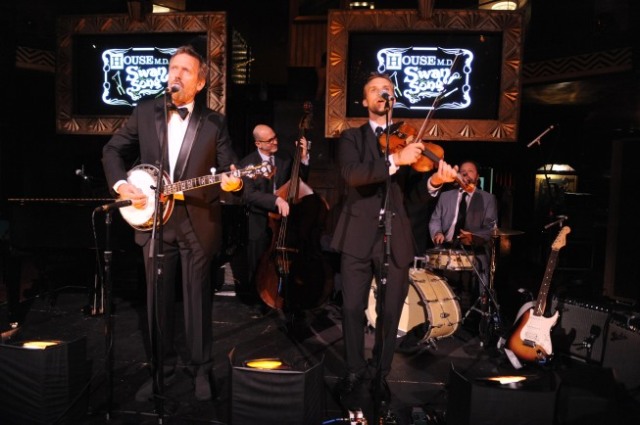 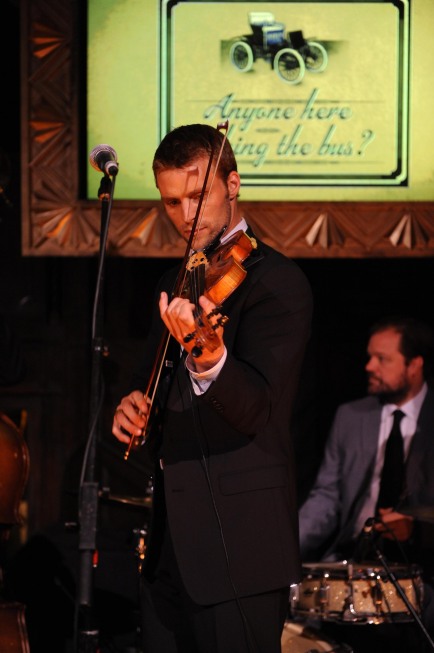 From House M.D Season 6, when House took Chase and Foreman to karaoke.

Chase has a nice voice, but the real treat is the HouseForeman combo as back-up singers. 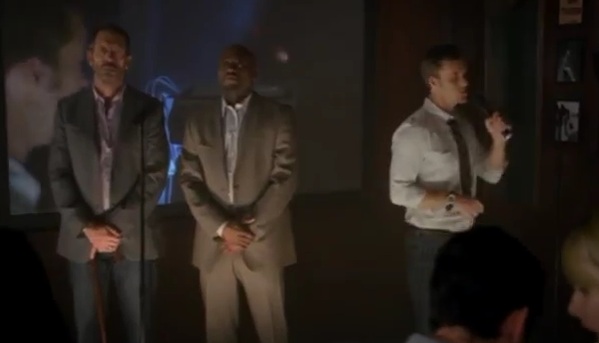 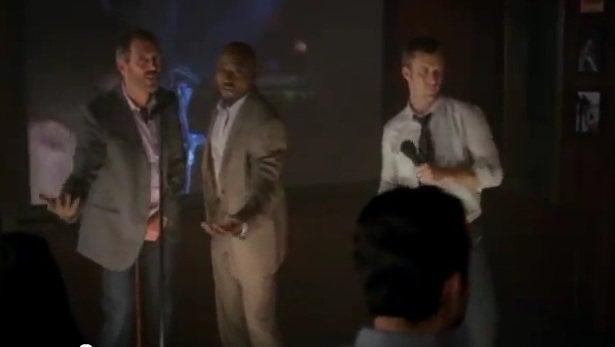 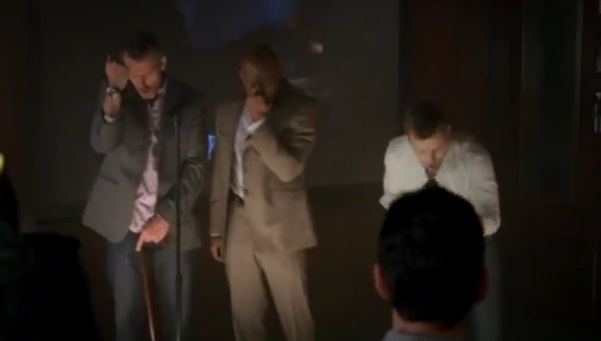 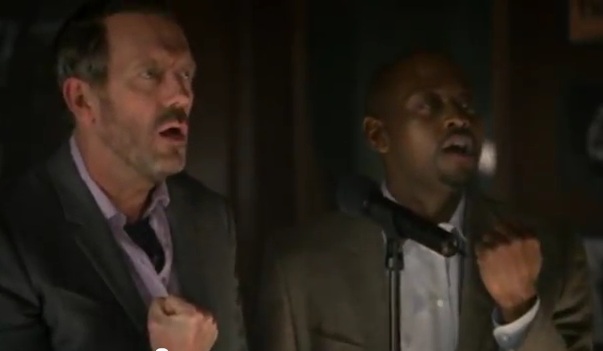 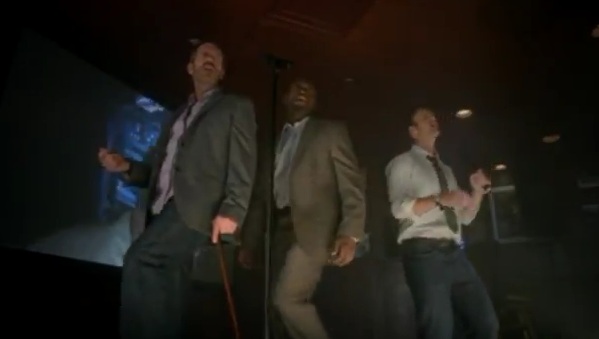 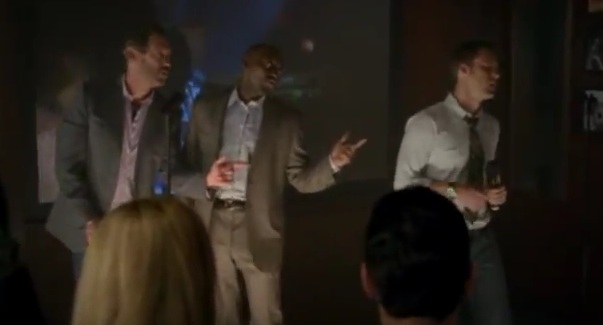 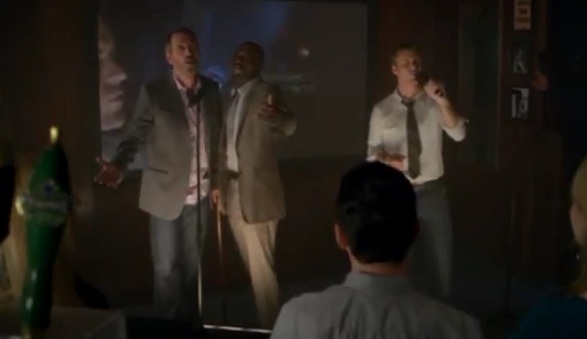 I was doing some work travel and only got the chance to see the episode today. Duh, blood clot! Of course. The thing that can be used to explain away any type of injury. Why didn’t I think of that?? So the actual initial injury is a single stab wound to the chest, piercing Chase’s heart (good aim, psychotic patient!). So House did fix it for Chase after all, he came up with the blood clot diagnosis. Interesting that Chase was chastising House for not being objective when House kept trying to confirm that Chase can’t feel his legs (‘I just said I can’t feel anything. Objectivity, House.”) Of course when it comes to diagnising himself, Chase’s mind immediately goes to the worst possible scenario (something I didn’t catch that causes permanent paralysis). What is up with Taub, Park and Adams performing the surgery to save Chase’s life? Don’t they have a trauma team at Princeton-Plainsboro? If we’re talking ethical breach or inappropriate conduct, that skirts very close to the line too, no?

After all the hype about the battle between House and Cofield and the meeting between superstar acting talents Hugh Laurie and Jeffrey Wright, I actually thought Wright is  better in his short scenes with Omar Epps and Jesse Spencer. The disappointment tinged with regret when Cofield deduced that the reason Foreman chose him to conduct the disciplinary hearing isn’t because Foreman thought he’d be an objective investigator, but because Foreman thought Cofield might be more inclined to save Foreman’s ass compared to other people because of their previous mentor-protege relationship. In the scene between Cofield and Chase, with a few words and gestures, Wright managed to show us what kind of doctor Cofield is – probably not  a brilliant genius like House, but someone gentle, caring and thoughtful towards his patients. 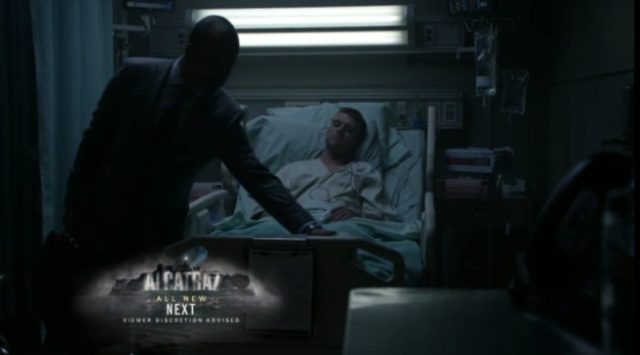 I was keeping track of the word ‘friend’ because of an earlier spoiler – it turns out House balked when Cofield said Chase is his friend (“he’s a coworker”), Taub didn’t say anything either way when Cofield referred to Chase as his friend, and Park referred to Chase as her friend on her own initiative (“My friend is here because you didn’t listen to me”.) The first two are predictable, the last one is a bit of a shocker. I would guess that Park and Adams have known Chase only for a few months at this time (show-wise, we’re talking Episode 5 to Episode 11, just 7 episodes in total). But maybe Chase and Park totally bonded that time she invited him (and only him!) out for drinks.

The blame-a-thon goes like this – Adams blamed herself because it was her diagnosis Chase was trying to test and she probably provoked the psychotic reaction by holding the needle in front of the patient; Taub blamed Chase for bringing a scalpel to a room with a patient suffering from a psychotic break; Park tried to cover for everybody but was so awkward and obvious about it she was found out, and then sorta, kinda implicitly put the blame on Foreman for essentially being a rubber-stamper for House (Foreman is no Cuddy, that’s for sure); House defended his disgnostic method and claimed he couldn’t have foreseen Chase and Adams defying his orders, but then refused to say that he blamed either one of them; Chase told Cofield no one is to be blamed, but actually seems to be blaming House. I’m mostly with Taub; Chase, what the heck were you thinking??? I understand all the talk about House fostering an atmosphere of recklessness, but at the end of the day, House did not bring that scalpel to the room, just as House did not kill Dibala back in Season 6. I balked at Cameron putting all or most the blame on House then, and I balk at Cofield doing the same now. It’s probably a shared responsibility, but I would put more of the blame on Chase himself. Chase recognized this during the Dibala incident, taking full responsibility at that time, so him blaming House this time around feels a bit like plot-contrivance as a set-up for next week’s episode.

I was going to say that the patient’s wife barging in to save House’s ass is so unsubtle and un-Housian, ….. except this show hasn’t really been that subtle and Housian anyway since the end of Season 3. Thank god the reason for the orange hair wasn’t that Chase and Adams are sleeping together; he was using her shampoo while showering at the hospital after a late night of drinking. Chase is right in this instance, seriously House, couldn’t you just tell him to stop coming in late? You’re his boss, that’s your prerogative. And what kind of boss smells his employees’ hair anyway? Creepy. The apology is unexpected, but it would be more touching if I know exactly what it is he’s apologizing for. For his method and process fostering recklessness and disharmony among his team members? For the prank with the shampoo? It’s hard to forgive someone if you’re not sure what they’re sorry about. Initially, I thought it was weird that Chase defended House pretty strongly when talking to Cofield, but seems quite angry at House in the last scene. But then I realized Chase was defending House from the charge of callousness and not caring about Chase’s injury, the anger is about something else altogether, not about whether House cared about him or not.

I started watching House again this season after a hiatus of about a season. Thirteen’s gone (yay!), Cuddy is also gone (not so yay), and Foreman is the Dean of Medicine (Seriously? They couldn’t find someone who, I don’t know, has at least head a department for a while to do the job? Wilson? Some other department heads we’ve never seen before? No one?). I like the two new female doctors, Parks and Adams better so far than Thirteen and Cameron. I’m getting really excited for Episode 11 (“Nobody’s Fault) and Episode 12 (“Chase”).  The press release for “Nobody’s Fault”:

When a violent incident involving a patient has serious consequences for one staff member, House and the team are placed under review by Dr. Walter Cofield (guest star Jeffrey Wright), Foreman’s former mentor and current Chief of Neurology. As House and each member of his team recount the details of the dramatic and life-threatening incident, Cofield must weigh the team’s unconventional brand of collaboration against their ability to save lives in the all-new “Nobody’s Fault” episode of HOUSE, airing Monday, Feb. 6.

The press release for “Chase”:

Chase takes on a patient, Moira (guest star Julie Mond), who is a cloistered nun on the verge of making her life-changing vows, and through the treatment process, he and Moira form a unique connection that tests their faith and reason. But when Moira’s condition worsens and requires a risky surgery, Chase’s judgment is compromised. Meanwhile, House and Taub try to remain one step ahead of each other’s pranks in the all-new “Chase” episode of HOUSE airing Monday, Feb. 13.

From the promo photos for “Nobody’s Fault”, I think it’s safe to assume that Chase is the staff member facing serious consequences from a violent incident with a patient (life-threatening injury?) He and Adams are seen wrestling with a patient in one photo; then in the photo where Jeffrey Wright meets with House’s team and Foreman, Adams is there, but not Chase. The format of the episode will probably be similar to season 2 episode “The Mistake (the one where Chase caused a patient’s death because he was too distracted by his father’s death to ask an important doctor-ly question). 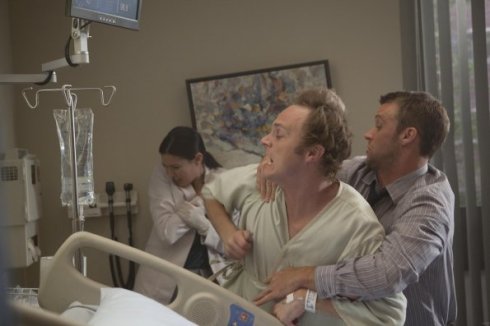 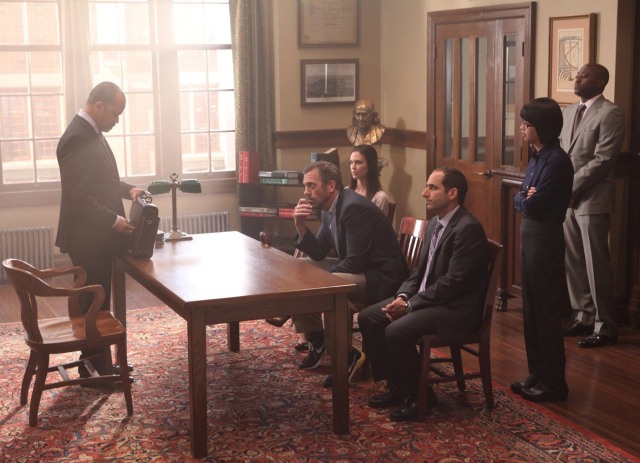 What’s interesting is that even though the press release said the incident is “life-threatening”, in the very next episode, Chase is already back treating patients. A few possibilities come to mind:

1) The injury isn’t actually life-threatening and the press release is just hyping up the episode.

2) Months have passed between the event in “Nobody’s Fault” and “Chase”, and Chase has recovered.

3) The events in “Chase” are actually Chase’s hallucination/dream while he’s unconscious/in a coma after the life-threatening incident (similar to House hallucinating treating a patient after he was shot). The not-yet-nun seems suspiciously similar to Chase himself – pretty blond, interest in taking a religious vow, faith versus reason dilemma. Chase could be the one needing risky surgery to save his life after the incident with the violent patient.

4) I’m completely misinterpreting the press release and the promo pictures and it’s actually some random nurse or doctor we’ve never seen before who is hurt. 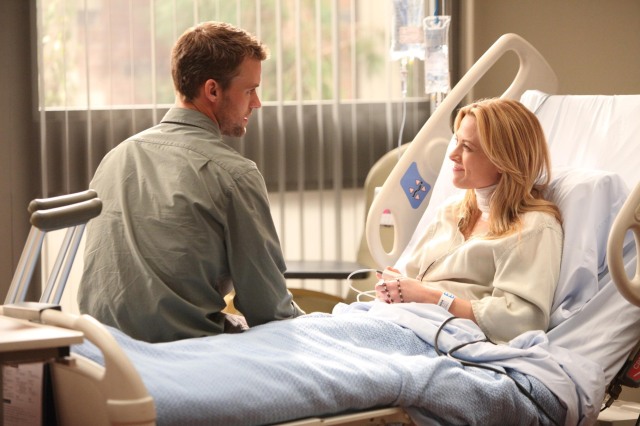