You know, I felt a little sorry for Joffrey here, mostly because he looks like a boy, still. All the comparison with Robb Stark and his bravery leading his men etc etc seems a bit unfair since Robb Starks is a man, and Joffrey is a boy. (At least that’s how the characters look on the show, I’m not sure how old they are supposed to be, but Richard Madden definitely looks like a fully grown man in the way that Jack Gleeson does not).

I love how Tyrion’s speech is not about honor and glory, or loyalty to the King and country (he knows that ship has sailed, with Joffrey basically running away from the battle) – it’s about the people protecting themselves and their own families. When all else fails, appeal to self-preservation, heh.

Awww, his mother’s favorite character is Tyrion. So the Robb+Talissa thing is really on. Bad idea, Robb.

The best episode this season so far, even without my man Stannis, heh (come back soon!) But the violence is off-the-chart this episode. And not just violence, violence witnessed by children, and violence done to children. I googled Sophie Turner, and is a little bit relieved that she’s older than the 13-year-old Sansa (she’s 16). On the other hand, this is her first acting role.

There’s a bit of Theon-Robb parallel with having to prove themselves to the men they’re trying to lead. Robb faced the same problem last season, when his authority and decisions were sometimes challenged, by the other lords, even by his mother (that scene when he wanted to let the Lannister’s spy go free). Robb’s way of dealing with it was to stand his ground and basically glower at the people challenging his authority, daring them to go further, and most of the time, it worked. Theon is obviously more weak-willed, more unsure of himself, more defensive, which leads him to make one mistake after another. But I’m sure it’s easier to be surer of yourself and more confident of your ability, when you’ve been raised as the son and rightful heir of Lord Stark, the Warden of the North, instead of his ward/hostage. And whatever reservations people might have about Robb, they are about his ability to lead, because of his age and inexperience. No one is questioning his position, first as the heir, and then as Lord of Winterfell after his father’s death. With Theon, it’s both, ability and position being challenged, questioned, prodded. Who is he, in the grand scheme of things? His father’s heir? That’s not guaranteed at this point, his sister has a stronger claim.

But of course a weak tyrant is usually more dangerous (and hateful) than a strong one. A Tywin Lannister, for example, would never have been manipulated by his subordinate to kill someone he doesn’t want to kill, or to do anything he doesn’t really want to do. Alfie Allen is excellent in the role; he manages to make me simultaneously wish for Theon’s death by a thousand unsuccessful decapitations, and to almost cry for him. Like poor Ser Rodrik said, he is truly lost now, there is no going back from this. I like that Theon’s poor attitude towards women ends up causing him a major setback. Father dearest is not going to be happy about Bran and Rickon escaping.

Can we have a spin-off? The “Arya and Tywin” show. Poor Tywin, everyone is his life is such a disappointment to him! From his children, to his relatives, to the people fighting for him. Only Arya can come close to satisfying his high standards, hehe. Littlefinger knows, or at least suspects, about Arya, I think, but is keeping it a secret for his own purpose.

Where the heck is Bronn? There’s a riot in the city, and the Commander of the City Watch is nowhere to be seen? Hmmm, I get the sense that they are setting up something between The Hound and Sansa (the ‘I didn’t do it for you!’ he said to Tyrion). God, please, no, that would be 10x creepier than Jorah Mormont and Daenerys. Believe me, it has nothing to do with looks, the age difference is just.too.much.

Oh Robb!! You’ve already made the mistake of not listening to your mother about the Greyjoys, please listen to her now about matters of the heart. Just because you’re a man, doesn’t mean you don’t have to honor the promised arranged marriage. I’m calling it now – Talissa really is a Lannister spy. I have another beef with Robb, he left Winterfell so poorly protected Theon could take it with a skeleton force (yes, Ser Rodrik took most of them to defend that other place, but he only took 200 men, which means there weren’t a lot to begin with). Your brothers (and current heirs, since you don’t have a son yet) are there! He might be great in battles, surpassing even Tywin Lannister, but he’s pretty crap when it comes to strategy and planning. My brother, who’s read the books, thinks it’s a mistake making him older in the show (he’s 14 in the novels) – Robb’s mistakes and missteps make sense if you think of him as a boy, but as the grown-up man we see on screen, it’s really infuriating. Granted, I don’t think we’ve ever been told Robb’s age in the show, but Richard Madden sure as heck is NOT playing a 14-year-old boy.

Jon Snow meets cute a wilding woman, something something or other. Aghh, I can’t really be bothered with this storyline. The only interesting thing about this is the wildling woman is played by Gwen the Downton Abbey housemaid who left to become a secretary. And Daenerys lost her baby dragons! I’m actually surprised this hasn’t happened earlier.

They were interviewed during the promotional trip in Brazil. Madden mentioned that Robb Stark is much younger in the book. Well then, maybe in the show they should stop making other characters call Robb Stark “a boy”, since as played by Madden, he’s obviously NOT a boy. And it’s especially weird to hear Cersei call him a boy, since Lena Headey looks like she’s only a few years older than Richard Madden.

Interesting interview with Richard Madden aout Season 2 of Game of Thrones and Robb Stark. The interviewer mentions that unlike his character in GoT, Madden laughs and jokes a lot. Yup, that sounds about right, except for Tyrion, the characters in Game of Thrones seem to lack a sense of humor. Can’t blame them I guess, what with the coming winter and the rising cold winds and all that, heh.

Madden on being recognized off the set:

In Rio, we did get recognized and crowds would wait outside the hotel for us there and you’re like, “This is quite odd,” because I’m not used to it. I’m just like drinking in a bar in London like I normally do or whatever and you’re in Rio and it’s like, “Well, you can’t really go out of the hotel for a little while.”

On the quite cumbersome costumes, and how they influenced his performance:

At first, I first tried on these costumes and I was like, “These awesome. It’s perfect and I really love them.” And then you’re shooting and you’re 20 days in or whatever and it’s 4 a.m. and my back’s aching and the costumes are still wet and they stink from the night before filming. And then you’re like, “I don’t want to wear this costume. Why can’t I be in King’s Landing in a t-shirt or something?” But actually, I’ve realized that it’s a huge influence on me as an actor. The costumes are so heavy and they mold around my body in a certain way and it changes how I stand and it changes how I breathe. The cloak dragging along the ground, it changes the way I walk. So actually, these things that could have been a weird out for me were actually really useful in terms of me creating Robb.

On only reading the books relevant to the season they’re shooting:

Because sometimes I don’t trust myself as an actor. (…) And then it came to me that I didn’t want to read too far ahead, because what I loved about reading Book One and then into Book Two, taking my character out of it, is you see characters and, as an actor, I want to make decisions and stick to that and then you get to a script by David [Benioff] and Dan [Weiss] or you get to a chapter in the book and you see a character go in a different direction and for me as an actor, that’s my favorite. (…) If I’d read the scripts for Season Two while I was shooting Season One, it would have influenced me and I don’t want it to. I think it’s more challenging for me as an actor and it’s more exciting for an audience member to see this character change live, rather than me letting elements seep in too quickly or too early.

On the difference between Robb Stark in the books and in the show:

I think yeah, there’s got to be changes. I’m very loyal to the book, but I’ve got to remember that we are doing the TV show and not the book and they are two different beasts and there’s got to be changes. You look at the difference in my age to what Robb’s age is, for example. But then I’ve always thought as well, something I’ve realized, is that in Westeros, in the Seven Kingdoms, a 15-year-old or 16-year-old boy is much older than a 16-year-old boy in our world today. They’ve gone through so much more at such a younger age in these worlds. You get to see it in the whorehouses, for example, girls much younger and that’s a natural process of life and that’s not what we’re used to. So when people say that I’m much older than what Robb is, I say, “Yeah, physically, mentally there’s much more parallels to where Robb is in the book to where someone in their early 20s would be.” They just go through a lot more life experience.

I don’t think Robb’s age is ever mentioned on the show, and I haven’t read the books, so I’m not sure how old he is supposed to be. But it always weirded me out whenever other characters like Cersei or Tywin would refer to Robb Stark as “a boy”, because as played by Richard Madden, he doesn’t look like a boy at all, he looks like a fully grown man.

Or rather, the actors playing them (Richard Madden, Kit Harrington and Alfie Allen). Allen looks so different from Theon on the show, but Madden and Harrington pretty much look like Robb and Jon, minus the funny clothes. Allen claims he would have liked to play Arya (nope, sorry dude, not plucky enough!), Madden and Harrington said they share some similarities with their on-screen characters (easy to say, when you’re playing basically decent and noble characters, heh). 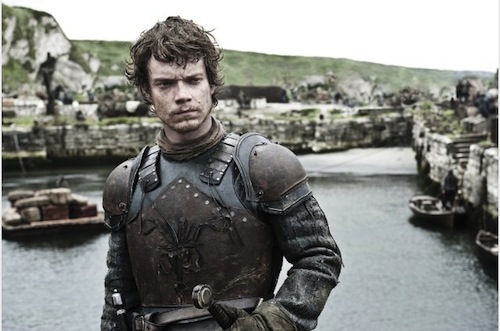 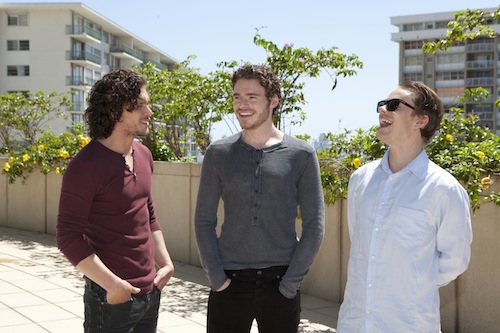 From Vulture‘s interview with Richard Madden, who plays Robb Stark in Game of Thrones:

Kit Harington said that on the Iceland set, when they’re at the bar, they fight about theories. Same in Belfast?
Completely. Sometimes I text with Kit or Gethin [Anthony, who plays Renly], and we laugh at about how geeky we are. I’ve been having a lot of Robb Stark-Renly jokes recently, about Renly crushing on Robb Stark. That always gets a good laugh.

There is already fan fiction about the Robb Stark–Renly Baratheon pairing.
[Laughs hysterically.] I have not read any of it yet. But we’re sending texts verging on that.

Well, if I have to choose between the Knight of Flowers and Robb Stark, I’d go for Robb Stark too, heh.